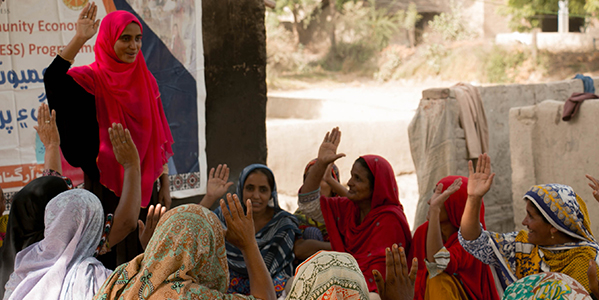 In remote villages of Sindh, women’s social, cultural, economic and psychological growth is hampered which deeply embeds them and their families in the blackhole of poverty. They are not ‘allowed’ to make a choice, turn that choice into action and achieve a result capable of transforming their lives. On my recent visit to villages in the districts of Larkana, Dadu and Tando Mohammad Khan in Sindh, I interacted with women and their families and listened to their experiences. These women struggle to attain their most basic human rights. I realized that they were scared. They had to ask for their husbands’ permission for every action they take. They did not have the agency to make their own decisions. They felt confused when asked a personal question and looked around for someone to answer for them. I tried to make them as comfortable as I could, but a sense of insecurity persisted in most of them. While in some cases I also shook hands with very vocal and confident women, that, however, is where I identified a gap. Among these few women who are organised to some extent, there still exist a number of them who are afraid: log kya kaheinge? Shohar kya karega?

The major reason for this significant gap in the implementation and execution of women empowerment is the marked difference between thought and action: theoretical stances and actual, real-life practices, which is evident in the remote villages of Sindh. Despite efforts to rehabilitate women, the greater problem is that women are still not empowered and communities still lack any form of agency and control. This is so because organisations, governments and institutions fail to understand that top-down approaches do no justice to transforming the system, as the problem lies in the societal institutions that perpetuate gender, race, and class dominations.

The masses think women should be empowered, because it is politically correct to say so, but the reality, sadly, indicates the complete opposite. This gap speaks volumes of how women ‘should’ be given equal opportunities as men or how they ‘should’ receive an education and earn a livelihood, but the resultant outcomes are still early marriages, domestic abuse, poverty and all-in-all a lack of ‘women empowerment’.

Empowerment and more specifically, women empowerment has had its meaning and interpretation changed over the years. Amartya Sen’s work describes it as an enhancement and expansion of the capabilities of poor people enabling them to negotiate with, participate in, influence and hold responsible certain institutions that affect their lives. But, over time, the works of many researchers,have defined women empowerment very differently, and the definition that resonates with me in light of my experiences on the field is that of Srilatha Batliwala. She argues that current power relations between individuals and social groups (women and the social system) can only be changed if certain means are adopted. These include questioning the existing ideologies that justify inequality between men and women, changing the means of accessing and controlling all forms of resources (especially intellectual and economic), and revolutionising existing institutions that bolster current power systems, which incorporate the media, family, state, and market institutions.

However, can the people of Sindh be considered to really have understood what women empowerment actually is and, if so, have they been successful in the implementation of it?

During my visit to Sindh, I saw a different kind of empowerment. Women who were forced to stay indoors, with responsibilities confined only to household chores were now transformed and aware of a larger world out there and of their capabilities to achieve much more. Some of these women are now small-scale entrepreneurs: Rehana has opened a local shop that she runs with her eldest son in their village Thaaro Deepar, while in another village in Dadu district there is Salma, who has re-opened a school that had remained shut for years and many others have established stitching and embroidering businesses. Previously, these women could not take action even if their sons were dying of hunger or their daughters needed to be hospitalised. They were unable to raise their voices and change their circumstances. These are women who, at one time, were unable to express opinions, beliefs and concerns and have now taken charge of their lives. They are mobilising and forming their own community institutions with the support of Rural Support Programmes (RSPs) under the European Union-funded Sindh Union Council and Community Economic Strengthening Support (SUCCESS) programme. This RSP philosophy of mobilizing communities is motivated by the key belief that people have the innate capacity and potential to change their circumstances. Real development can only materialise if these potentials are unleashed through organising and engaging the poor in the development process. Unlike in the case of other top-down development approaches, there have been evident changes, to some extent, in the areas where RSPs have intervened, including Sindh.

I believe that the traditional and previously dominant ideologies of women’s role in society, that flourished across Pakistan, had to be questioned in order to start achieving these positive results and change. If there was still a lack of awareness about women empowerment, the resultant outcome would have been unfavourable and the desired results of the various RSPs would have not been achieved. If traditional ideologies continue to prevail, where men are always favoured over women or where women are not given equal opportunities as men, it will be detrimental to the cause of women empowerment and their social mobilisation in the rural areas of Sindh and all over Pakistan. Therefore, it is necessary to question traditional approaches, ideologies and conceptions about women’s role in society and it has continually been done through the work and efforts of all the RSPs under the SUCCESS programme.