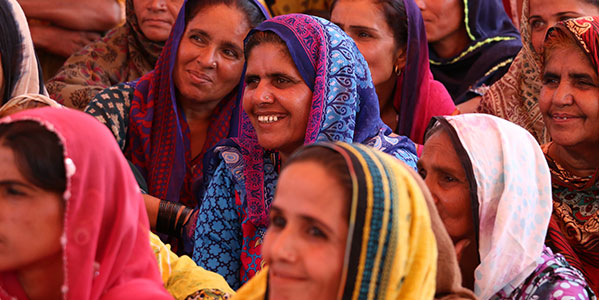 The women leaders of Interior Sindh

The landscape of interior Sindh and its immensely diverse culture is usually marred by the tales of feudal lords, woes of bonded labor and socio-cultural excesses. According to the Multidimensional Poverty Index 2016, 4 out of 10 Pakistanis live in poverty with around 43% of population of Sindh living in poverty. Generally this is the sole image of the province presented to us by mainstream media. This woeful landscape is however being changed, through a collaboration of governmental actors and the various Rural Support Programmes that work at the frontline for this segment of have-nots.

Such an untold and yet fascinating story is about the women in eight districts of Sindh that are implementing what most of the country still considers far-fetched and wishful. A system of local self-governance at the grass root level has been a dream of our federation since long, with numerous such efforts made in past including the most recent one in 2016. However, even after these country wide Local Government elections, there was little that could be materialised in truly devolving power to the people.

To overcome this administrative problem, which often gets relegated in the stream of partisan politics, an effort was made by the Government of Sindh under its project named Union Council Based Poverty Reduction Programme which was launched in 2009. This laid down the basis for a concentrated effort on poverty reduction and socio-economic uplift of these rural people especially women, through a European Union funded Programme known as Sindh Union Council and Community Economic Strengthening Support (SUCCESS).

SUCCESS presents itself as a programme that aims to promote Community Driven Local Development in far flung areas of the province that are in dire need for progressive intervention. This vision is operationalised through mobilising 15-20 rural women in each hamlet (muhalla) to form Community Organisation (CO), representatives of each CO formed Village Organisations (VOs) at each village and representatives of each VO formed a Local Support Organisations (LSO) in each union council. The LSOs further have formed Network of LSOs at tehsil and district level to enhance their impact and to make it sustainable for generations to come these institutions are made of, made for, run and led by around 600,000 local women.

The overarching strategy employed by SUCCESS is to achieve empowerment of women and communities to reduce poverty. The social mobilisation approach of RSPs creates social capital necessary to assert their developmental and civic rights, making government accountable to the people and promoting transparency – thus contributing to strengthening democracy at the grassroots level and supporting local governance. Studies from the programme found that with active encouragement from RSPs, there has been immense increase in women’s confidence, greater say in household decision making and increased mobility for women especially for those who are leading the Village Organisations and Local Support Organisations.

The Village Organisations and Local Support Organisations are provided with a range of capacity building and financial support to serve members of their community organisations. A revolving fund namely Community Investment Fund (CIF) of PKR 4million to PKR 6 million is being established in each of the LSO , where women from the poorest households are provided with micro loans or cash grants to start micro level enterprises or invest in productive assets. As of August 2019, around PKR 1.08 billion worth of loans have been disbursed to 69,036 households and PKR 340 million worth cash grants have been disbursed to 22,838 poorest households across the eight districts through the LSOs and VOs.

Technical and Vocational trainings in demand driven skills such as stitching, sewing, designing, beautician, basic computer skills, driving, construction work, automobile and farming are provided a total of 14,050 young women and men. Overall, around 65% of the beneficiaries of Technical and Vocational Skills Training are now self-employed.

Micro Health Insurance (MHI) is another significant part of the effort, where social protection is provided to members of 128,064 households from the poorest and the most destitute segments of the society. So far 8,718 patients have been treated with PKR 128 million. MHI has saved the poorest in distress from overwhelming debt burden and pauperisation. The Village organisations are provided with funds to plan and implement community infrastructure projects that are most needed. So far the VO have implemented 418 community infrastructures worth PKR 167million benefiting 40,912 households. The beneficiaries reported improved connectivity with other nearby communities, as more linking roads and improved streets eased the commute through the Community Physical Infrastructure intervention.

These are the interventions that have changed the lives of numerous families fostered primarily by their female members, such changes were brought by women like Sughra from Sujawal, who not only utilised the CIF loan to invest in livestock, but also took sewing and stitching skill training from the Institute of Rural Management under the vocational training component. This finally enabled her and her daughter-in-law to open a shop in the city center to earn additional income for their family. Similarly, Nadia hailing from Larkana, due to her role in the VO was finally able to directly communicate to the Deputy Commissioner and re-opened a local government school that was shut since 9 years.

The need of the hour however, for such a proactive and impactful programme is to sustain even after the funding has dried up, is for consistent and collective action by public and private partners both. This can only be materialised through conscious policy making and coherent political will in supporting such initiatives.

All in an effort to take nearly half (49%) of our population i.e. women, out of the poverty and dependency equation; with a vision to bring about a new dawn of inclusive development through future women leaders and planner in our overwhelmingly patriarchal society. As, in the promising words of  a woman who serves as the President of LSO from District Sujawal, “Women in our community are now able to  things that not even men were able to do so before”.

The writer works as a Young Development Professional, with the Sindh Union Council and Community Economic Strengthening Support (SUCCESS), programme of RSPN.