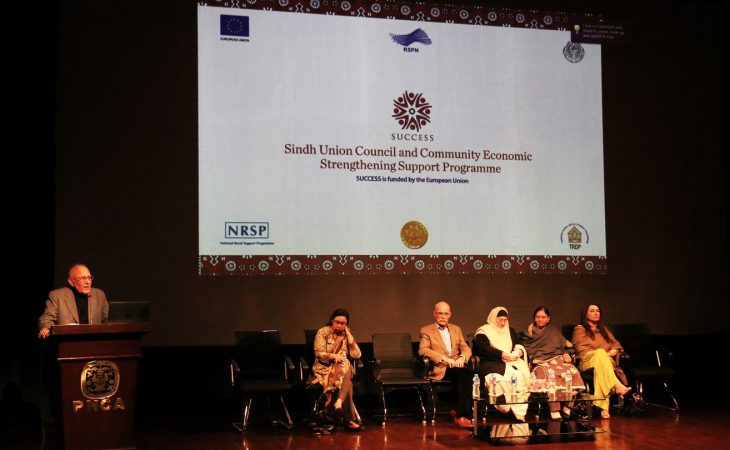 ISLMABAD, 19 February 2017: Rural Support Programmes Network organized a seminar titled “Women Empowerment: The road to Success” at the Pakistan National Council of Arts (PNCA), Islamabad today. The festival was part of the three-day “Heritage Festival”, organized by Sakafat, an organization working for promotion of culture and heritage.

The panelists highlighted various aspects of women-empowerment, including the role of community-driven development (CDD), social organization, legal empowerment, and the impact of climate change and food insecurity on women empowerment.

The Chief Guest, Ambassador of the EU, Mr Jean Francois Cautain conveyed his appreciation and reinforced the support of the EU to empowering women all over Pakistan, particularly while collaborating with RSPN.

“My wife and I recently visited Sindh and witnessed the SUCCESS Programme which is only focusing on empowering rural women by the RSPs. I have to say that we were immensely impressed with what the programme has already achieved in only six months of its inception”, he said.

The European Union’s Ambassador to Pakistan further added, “We saw women in rural Sindh literally transform their lives and heard them speak about what they have achieved by taking their development in their own hands. I have seen women in Sindh rally and advocate to their local government officials as a collective force and fight for their rights. If you want a sustainable world, men and women have to work together to progress.”

Mr. Shoaib Sultan Khan, Chariman RSPN, while sharing his six-decades-long experience of working for development of rural communities, emphasized the importance of people organizing and coming together to solve their own problems and fight poverty. He stressed that human beings have an innate potential that needs to be unleashed to create awareness, enhance capabilities, increase incomes, and enable empowerment.

He said that money attracts money, and savings are extremely important if you want to improve your situation. Shoaib Sultan Kahn displayed several examples of what women have been able to achieve by organizing themselves and overcoming several socio economic constraints from Gilgit Baltistan to Andhra Pradesh in India. We work with the assumption that even the poorest man or woman has the potential to come out of poverty; our role is just to help them unleash this potential. Currently, we are working on a programme in Sindh, which works exclusively with women with the help of the European Union. We have the will and the methodology; we just need the political support to keep moving forward.

Award winning journalist, Ms. Rina Saeed Khan, made a presentation about the impact of climate change on rural women. Speaking about the adversities caused by climate change, Rina addressed food security issues, floods, displacement and the severity with which Pakistan is affected by climate change. She said that women can play a very important role in ensuring food security, because most of the food around the world is grown by women. She said that Pakistan can secure its future by including women in the labor force, and by promoting small scale food production enterprises.

Artistan Hajra, from Arbab Mir Baher Community Organisation, Sukkur, shared her life’s story. She said that her life has changed since the formation of a community organization at the muhallah level. She said that their links to markets have improved and now the women are earning much more than what they used to earn earlier. She said that Sindh Rural Support Organisation (SRSO) played an important role in her transformation by not only training her, but also giving her opportunities for exploring and accessing markets.

Professor Farkhanda Aurangzeb, Manager Legislative Watchgroup, Aurat Foundation, spoke about legal empowerment of women and different laws introduced to ensure protection of women’s rights. She said that while formulation of laws is important, it is equally important to spread awareness about the legislations, and to train the law enforcers about the legislatures. She said that bureaucrats and lawmakers are not aware of the details of laws formatted for women’s rights. She said that even people in the judiciary at times did not completely understand the laws.

Ms. Neelum Turu, a political activist from KPK, Chairperson of Women Commission KPK, discussed the beginning of the women’s rights movement at the global level. She said that the tradition notion of women being lesser than men has changed, and now more space is there for women to start working equal to women.

The seminar ended with screening of a documentary about the Sindh Union Council and Community Economic Strengthening Support (SUCCESS) Programme, implemented by RSPN, SRSO, TRDP and NRSP, in collaboration with the government of Sindh, with financial support of the European Union.

Towards the end, Dr Memoona Khayal from Sakafat thanked the guests for attending the seminar and the festival.

Photographs of the seminar can be seen at our Facebook page.