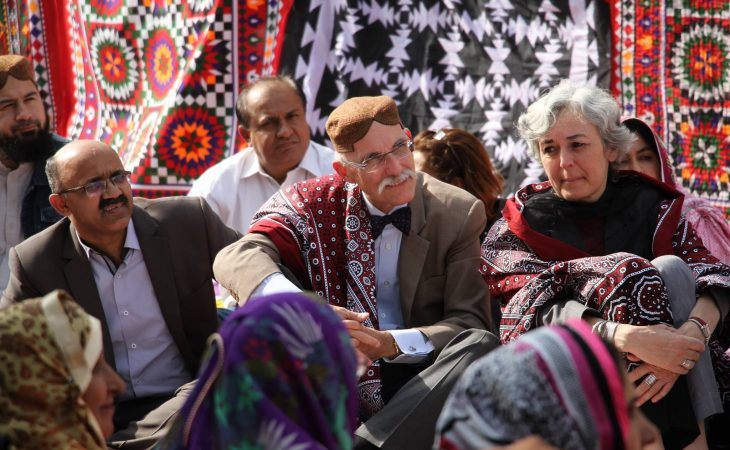 EU envoy praises women for their commitment to local development

SUKKUR: The EU Ambassador, Jean-François Cautain, along with his wife, Sonia Cautain, attended a dialogue meeting at the Sindh Rural Support Organization (SRSO) Complex here on Monday, where leaders from various community organizations from Jacobabad, Kashmore-Kandhkot and Shikarpur districts shared their experiences and success stories.

Speaking on the occasion, Ambassador Cautain congratulated the rural women for their dedication for and commitment to the cause of local level development. He said that work continuously being done by the women is inspirational and it should be continued. Sonia Cautain expressed her gratitude to the village organizations for according them a very warm welcome.

She said that energy and motivation of the women is phenomenal. Speaking on the occasion, the CEO of SRSO, Muhammad Dital Kalhoro, said that in 2009, former Chief Minister of Sindh, Syed Qaim Ali Shah, had approved the Union Council-based Poverty Reduction Programme (UCBPRP) for two of the most backward districts of northern Sindh, Shikarpur and Kashmore-Kandhkot.

He said that the UCBPRP worked only with women and empowered them not only economically but also on attaining self-confidence and power of their own potential to improve their status. He also thanked the EU Ambassador Jean François Cautain for supporting various projects as part of EU’s efforts to help reduce poverty in the regions.

Later, a meeting of the leaders of Village Organizations (VOs) was held in the Imam Bux Mallah village of Union Council Mohenjo Daro. The meeting was attended, among others, by Jean-François Cautain, Ambassador of the European Union to Pakistan, and his wife, Sonia Cautain.

During the meeting, the local women leaders apprised the guests of the performance of their organizations, their achievements, so far, and their aspirations and dreams. The women leaders were representing around a hundred Community Organizations formed by Sindh Rural Support Organization (SRSO) as part of the European Union-funded SUCCESS Programme.

Sharing their experiences, they said that by actively engaging in the development of their Goths, and area, they feel more empowered and confident. The women leaders said that their strength has grown by coming together and working in an organized manner. Many women also shared stories of their resilience in the face of odds.

Published in The News