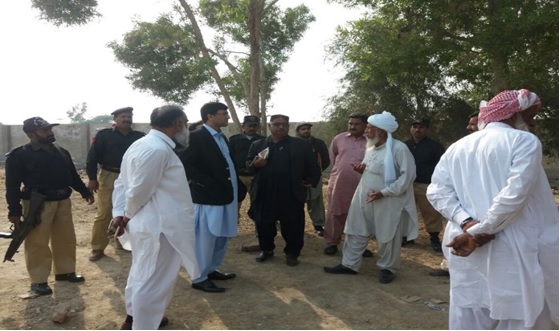 One key objective of the Sindh Union Council and Community Economic Strengthening Support (SUCCESS) Programme is to foster a robust social pillar to complement and supplement the government’s administrative and political pillars. The social pillar is based on the social mobilisation approach to Community-Driven Development (CDD) that the Thardeep Rural Development Programme (TRDP) follows, i.e. to support the poor rural households to foster their own Community Organisations (CO) at mohalla level, Village Organisations (VO) at village level and Local Support Organisations (LSO) at the Union Council level. These Community Institutions are the social pillar.

Since the focus of the SUCCESS Programme is on the poor households, the first major initiative that TRDP launched was to conduct a house-to-house census using the Poverty Scorecard (PSC). Computer Assisted Personal Interviewing (CAPI) method was followed whereby enumerators entered data directly on tablets. PSC scores are used to calculate the likelihood of the poverty status of the households; lower the score, higher the likelihood of poverty and conversely higher the score, lower the likelihood of poverty. All households with 0-23 PSC score fall in the poor category and those falling in the 24-100 PSC category are non-poor. Under the SUCCESS Programme all poor households are to be mobilised into COs; non-poor can also become members but the focus is on the poor households.

During the process of undertaking PSC census, TRDP undertook strict quality control measures to ensure that all rural households are covered and about the quality of PSC data.

Once the district census was completed, a summary of PSC data was presented to the Deputy Commission (DC) of Dadu, administrative head of the district. He was also briefed in detailed about the SUCCESS Programme goal, purpose and objectives. 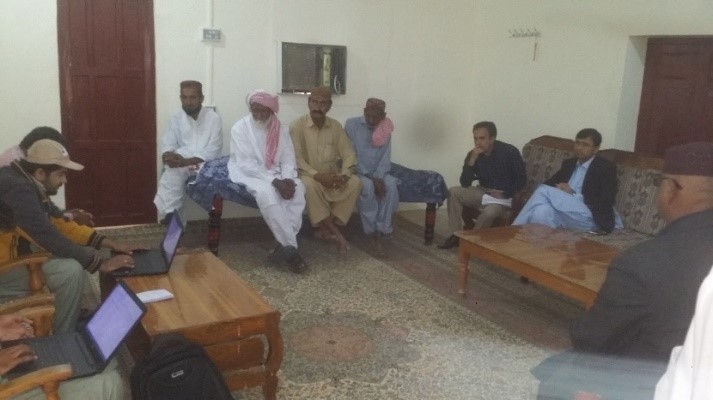 DC Dadu meeting staff and community representatives during his visit

On January 31, 2017, Deputy Commissioner visited Union Council (UC) Kamal Khan, Tehsil Johi. The purpose of this visit was to validate the PSC information provided to his office by TRDP. DC selected this UC due to its remoteness. TRDP District Manager Mr. Ali Nawaz Nizamani received a call from the DC’s office to accompany the DC on his official field visit to UC Kamal Khan. The purpose of visit was not shared with Mr. Nizamani. The Deputy Commissioner visited four selected villages and after meeting with villagers, validated PSC of 16 households. In all 16 cases, validation was positive.

After this validation exercise DC held an informal meeting with villagers in village Bajai Khan Mastoi. During the meeting, the DC spoke about the huge efforts the Government of Sindh (GoS) is making for poverty reduction in the province, and particularly in district Dadu. DC thanked the Euopean Union for supporting GoS for the SUCCESS Programme in district Dadu in partnership with TRDP. He spoke about the the validation exercise and said that he appreciates the excellent work of TRDP in the district.

Later, the DC directed the government line departments to more actively coordinate with TRDP to support the newly formed COs, VOs and LSOs. DC said that these organisations of the people are the best forums to increase the outreach of government services to all rural households. He thanked Mr. Ali Nawaz Nizamani and his team for the solid start made the SUCCESS Programme in district Dadu.