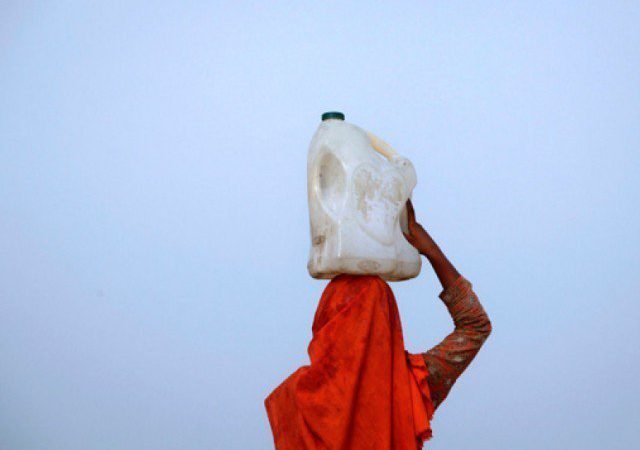 At the World Economic Forum in 2015, water crisis was declared the number one risk that could impact societies globally as a measure of devastation. Due to unsustainable water use, groundwater resources are depleting at an alarming rate in many parts of the world, with almost one in every 10 people (663 million people) not having access to safe water.

In Lahore, the current water withdrawal rate – the total volume removed from a water source such as a lake or river – is more than 17 cubic metres per second per 2.6 square kilometres, leading to a depletion rate of 0.55 metres every year. At this speed, the underground water table would drop by 70 metres by 2025.

If emergency measures are not taken, Water and Sanitation Authority Director Arif Butt says the city dwellers will face a water crisis in near future. “The main reasons for this water stress were increasing population load coupled with poor urban design including conversion of significant land into roads and concrete pavements, curtailing scarce land recharge opportunities,” he explains.

The case of India’s Gujarat

If Pakistan is going to reform its water usage, lessons can be learned from neighbouring India – the largest consumer of groundwater in the world. Of particular interest is the successful investment in water infrastructure that led to increased water storage and groundwater recharge in the state of Gujarat, which borders Pakistan.

Facing deep water stress, the state of Gujarat invested in building up its water infrastructures – approximately 500,000 check dams and farm ponds that not only often suffered from low and erratic rainfall but also from early ends to the monsoon season. The state also started to ration electricity to farmers to limit unchecked water withdrawal through water pumping. Since then, water shortages have been controlled to some extent and traditionally dry regions have been able to secure sufficient water for kharif crops, which are cultivated and harvested during the monsoon season, in the case of less rain due to climate change. Although challenges remain, these successes have significantly helped agriculture in the state.

According to a report by the World Wide Fund for Nature (WWF) titled “Situation analysis of the water resources of Lahore”, the population of Lahore grew to 10 million in the last two decades and will continue to grow to 22 million by 2025. This population load will accelerate water demand to 3.2 billion cubic metres per year from the current 1.985 billion cubic metres per year.

In a country like Pakistan, where agriculture accounts for 20.9% of gross domestic product and 42% of its labour force is employed in the sector, unsustainable water use can lead to decrease in fresh water supplies, reduction in agricultural production, loss of employment, migration and extensive socioeconomic stresses.

The magnitude of the water crisis

Climate change would exacerbate weather changes affecting livelihoods of millions of people as it did in 2010 super floods of Pakistan which is among countries such as India, China, Indonesia, Nigeria and USA whose population would cross the 300 million mark by 2050. With this population, water shortages would be no more an ordinary hazard. In particular, large urban populations in cities would be worst affected if due attention is not paid to stable water discharge with water recharge.

Though Pakistan has binding international commitments being a signatory to the Sendai Framework for Action (2015-2030) and earlier to the Hyogo Framework for Action (2005-2015), local-level capacity building of the frontline departments at the district, tehsil and union council level remains limited, if not non-existent. At best, district disaster management plans provide a guideline on flood response as floods are the most recurrent hazards, without any consideration for long-term rehabilitation and mitigation measures. Lacking good governance, all disaster preparedness is but ad hoc and that too limited to immediate issues than strategically building resilience against future hazards that can severely affect the life and livelihoods of future generations. The understanding of the effects of climate change calling for concerted and integrated efforts is limited to policy levels and has not transpired in local actions.

While the meteorology department provides weather predictions to more than 100 offices and departments, district disaster management authorities lack financial and human resources to take steps for climate change and disaster preparedness and ensure compliance by other departments through interdepartmental coordination.

As all politics is local, local action must be our greatest hope for building socioeconomic resilience, strengthening communities, and creating connections across the country. At the national level and in the post-18th Amendment scenario, provincial governments are responsible for taking action to prepare for and adapt and mitigate to climate change, manage water resources and secure the lives and assets of their population.

International and national humanitarian and development organisations must work with provincial governments to build capacity at the district, tehsil and union council level. These organisations must rethink their role to not ignore disaster risk reduction priorities during response, relief, recovery, and long-term rehabilitation. Local actions must be customised to the local context and needs. In view of the growing urban sprawl and to make cities climate change resilient to cope with water shortages and excessive rainfall, private and public urban housing societies must be bound to reduce total paved areas.

Unlike current situation where district governments end up as implementers of the disaster risk reduction policies and plans drawn at the federal and provincial levels, district governments and local communities must be engaged in agenda setting. Sustainable water management must be taken seriously as water shortages can affect livelihoods of millions while multiplying socio-economic stresses. Keeping in view the political economy of climate change and the need for government action, political leaders and public policy makers must be taken onboard through the creation of shared spaces where ordinary citizens can hold public officers accountable for their actions.

Dr Abdur Rehman Cheema is a social scientist and development practitioner based in Islamabad; he tweets @ARehmanCheema and can also be reached at arehmancheem[email protected]. Muhammad Waqar is Lecturer at the College of Earth and Environmental Sciences, University of Punjab and can be reached at [email protected].