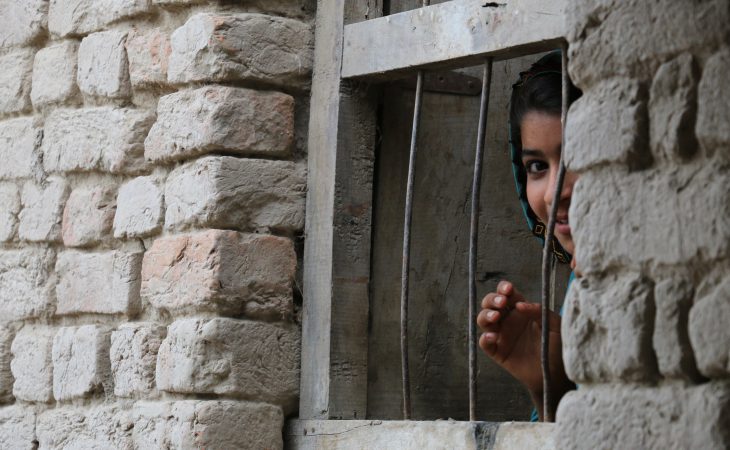 We started our journey from Islamabad, landed at Karachi airport and, after two hours, boarded another flight, stopping at Mohenjo Daro for a short while, before finally touching down at the Nusrat Bhutto Airport, Sukkur. The evening had fallen, and the rays of sun were slowly and gradually vanishing, leaving behind trails of beautiful colours, which, mingling with the slowly strolling clouds, created a poetical scenery, pleasing to the eyes and heart. The temperature in Sukkur was mild, and the landscape was filled with dust rising due to threshing of wheat crop. Large green fields spread up to the horizon added to the beauty of the land that is known as a cradle of civilisations.

We had arrived in Sukkur to attend the first community dialogue organised by Sindh Rural Support Organisation (SRSO), as part of the EU funded Sindh Union Council and Community Economic Strengthening Support (SUCCESS) Programme; the first dialogue was to be conducted by Mr. Shoaib Sultan Khan, the development guru himself. I was particularly excited to attend the session, because I had heard so much about the ‘man in hat’ who, I certainly knew, had played a crucial role in transforming thousands of lives in Gilgit-Baltistan, my native region. My family was one of the beneficiaries of the RSPN mobilisation initiatives implemented in the region by AKRSP in the early 80s. In retrospect, therefore, this first community dialogue, for me, was an enactment of the dialogues that were conducted in my native village and the surrounding mountainous valleys three decades ago. I was, in hindsight, hoping to triangulate my experiences with the insights, knowledge and experiences of the guru, with the hope of developing better understanding of the dynamism, and difficulties, of community driven rural development.

This personal goal, nevertheless, was secondary to the primary purpose; helping the documentary crew, from M/S Mercury Transformations, in video recording the first dialogue, so that it could later be used as a training material, and also included in the documentary being produced. I was staying with the documentary crew in the region for three more days to record stories for the SUCCESS informational video.

In the morning of 29th March, we travelled from Sukkur to Jumo Shaikh village located in Union Council/Taluka Mahar Wada, District Larkana. The venue for the first community dialogue was particularly charming; a clean and plain field with thick foliage of Neem trees hanging over the area, giving it a cool, pleasant and fresh aura, beautifully complemented by the traditional and colourful Reelis hanging in the surrounding. Around 200 people, mostly women, were seated on the modestly carpeted land. The venue seemed to have been prepared meticulously for the first dialogue.

Introductory remarks were made, and then Mr. Shoaib Sultan Khan took the mic, accompanied by Mr. Muhammad Dittal Kalhoro, CEO of SRSO and Mr. Jamal Shoro, SUCCESS – SRSO Programme Manager. The discussion began smoothly, and we got busy in taking photographs and video shots of SSK and the audience, while keenly listening to what was being said. Mr. Shoro translated SSK’s sentences in Sindhi for the women, most of whom didn’t understand Urdu completely. The dialogue with the community continued for more than an hour. It was enlightening to hear SSK explain the social mobilisation process espoused by the RSPs. For me, it was like a very important and highly beneficial crash course, because I was able to not only understand the processes, but also the philosophy and the intended impact.

Later, Mr. Shoaib Sultan Khan and Mr. Faizullah Qureshi, SRSO Board Member, planted trees, and also distributed some mango saplings among a number of women who had gathered for the community dialogue.

From Jurno Shaikh, we moved to SZABIST’s Larkana Campus, where an experience sharing session and the SUCCESS inception workshop had been organised. Both sessions were well attended and well organised. Listening to the UCPBRP beneficiary women share the stories of their transformed lives was a great experience; their confidence, eloquence and their stories of rising from the ashes like the metaphorical dragon had many lessons for all of us.

Later that day, we travelled with the UCPBRP beneficiaries to Shikarpur district, almost two hours away, to video document their stories. We were able to record two interviews before darkness took over and the ambience became too dark for the cameras. The journey back towards Sukkur was peaceful, but our bodies were tired. We stopped at a well-lit restaurant on the Highway, and were surprised with great tasting meal, including mouth-watering fish gifted by Sindh Sagar, or the Indus River that originates somewhere deep in the mountains, between Baltistan and Ladakh. The journey to the land of no-dreams sleep was long and deep.

The next morning we travelled back to Larkana, because we had to visit two villages where the efficient and cooperative SRSO staff had identified some potential stories for the documentary. The whole day was spent in the field and we were able to record two stories in details. We also video recorded the poverty scorecard (PSC) processes. It was astounding to know that out of the PSC surveyed households around 72% are impoverished, scoring less than 24 out of 100. The same, unfortunately, is also reflected in the real life.

The human suffering, despair and poverty we saw was heart breaking; hunger, disease and poverty reign supreme in the real rural areas of the ‘rural Sindh’. The contrast between life in cities like Sukkur and Larkana, and the rural peripheries is striking. Skilled in agriculture and living at the peripheries of vast, fertile, lush green fields, tens of thousands of ordinary Sindhis roil in poverty, while their elected leaders look away. Landlessness appeared to be a major factor contributing towards the impoverishment of the millions in rural Sindh.

Managing the expectations of the future beneficiaries in this context is a work of art, because the resource-less people expect to get money or some physical benefit in return. Highlighting the importance of social mobilisation will have to be made an important

We packed up the cameras, after a hard full-day work, and hit the road on the way back to Sukkur. The pinkish-red, clouds were a treat to the eyes. We stopped to take a few snaps. The delicious Biryani we had packed for lunch, but hadn’t got the chance to devour, was warmed for us by a kind Dhabba wala. The tea at the Dhabba was also very tasty. On our way back, we saw the mausoleum of the Bhuttos at Garhi Khuda Bux, bathing in
light. We visited the expansive establishment, and were in awe of the glory of the building.

At around 10 o’clock we were in the guest house. The shots for the next day were discussed and soon we were overtaken by sleep.

On the third day, we travelled to Shikarpur, where we had arranged through Ms. Parveen Mehr of SRSO, to shoot another story based on the UCPBRP success stories. This story was particularly interesting because we were able to see that children had established a community organisation of their own, and were saving money for utilisation in the future. The whole day was spent in the Shikarpur, because this was supposed to be a detailed story, highlighting the transformational impact of the RSPs’ social mobilisation model. The story of Bisma Community Organisation is truly inspiring; the impoverished woman almost lost a girl child named Bisma, unable to pay for her health. She had to brave several storms to be able to transform her life, with essential support and motivation coming from her engagement with the SRSO social mobilisation team. Now, her daughter, whose life was at risk once, has established her own CO, naming it Iqra CO, and engages around a dozen girls from her village. Their savings are meagre, but their vision is broad and they appeared to be determined to take the Iqra CO forward. Bisma’s inspiration is her mother. We also interviewed Bisma’s dad, to show how male support can help the women in moving forward in their lives, and changing the lives of not only their households, but also the entire village community.

Despite of our passionate refusals, for the being of being a burden on the family, we were offered, in the spirit of the matchless Sindhi tradition of hospitality, delicious Karahi and Biryani in the evening, after we had packed up the cameras. Unlike yesterday’s gloomy stories, today we were able to see a glimmer of hope. The day was well spent. We held a short informal meeting to discuss the video shooting experience and bid farewell.

The next day I flew to Islamabad directly from Sukkur, envious of the Mercury Transformations crew who had, in the wee hours of the morning, hit the road to reach Islamabad in their car.

Mark your calendars: SUCCESS will be featured at the 2020 JUST FUTURE International Conference. Join us on Friday – 17th July 2020 at 10:30 am EDT / 7:30 pm Pakistan Time as Anjum Malik (RSPN SUCCESS Communications Officer) speaks as a co-panelist on the Cultural Economics Panel. Program details and RSVP on the link below: