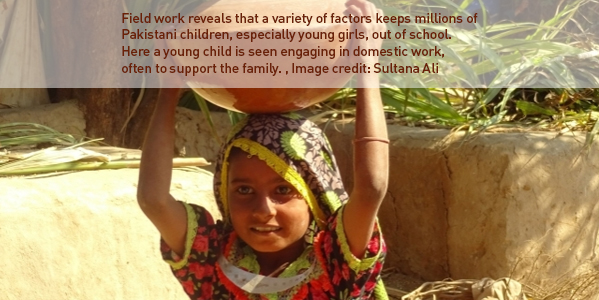 Exploring the many barriers to a girl’s education in Sindh, Pakistan

Pakistan ranks 138 (out of 144) in education, and has a female literacy rate of just 43 per cent. As investment in education increases, there is a need to understand the ground realities that deter children’s participation in the education system. Sultana Ali and Abdur Rehman Cheema explore some factors that are road blocks to improving female literacy.

During our field investigations, we often hear that people linking education of a girl to ruin of the families’reputation, but breaking away from the repeated cycles of educational deprivation of women is easier said than done as this is embedded in structure, norms, culture and values of a society.

As per The Global Gender Gap Report 2016, Pakistan ranks 138 out of 144 countries in education, with female literacy at  43 per cent and male literacy rate at 70 per cent.

About 21 million children between the age of five and sixteen out of school, and the provincial budgets have significantly increased from 50-80 per cent over the last five to eight years. Not surprisingly, most of the budget increase is spent on salaries and the non-salary budget meant for improving the quality of education remains unspent. These lapses in governance reflects in the restricted choices available to the poor in the country, especially women.

As part of the research component of the six years (2015-2021) Sindh Union Council Community Economic Strengthening Support Programme (SUCCESS), funded by the European Union, we visited rural areas of Sindh to find gendered dynamics of girls’ education beyond mere access to schools.

The programme aims to to mobilise 770,000 women to improve the income, health and education of women from all rural areas in eight districts in Sindh Province in Pakistan by 2021. As part of the programme there are conversations with parents, school teachers and school management, landlords and with children to improve the quality of life and also to increase student enrolment and retention.

During the field work we met 14-year-old Fatima, a resident of Thul, a village in district Tando Allahyar, who mentioned that she had to quit the school when her only female teacher passed away.

She added that three years had passed but no female teacher has been appointed in the government girls’primary school. Only a few girls go to the boys’ primary schools and others are not permitted by parents to attend classes with boys. Only 25  per cent of girls were going to school as compared to 60 per cent boys as per the Rural Support Programme Network’s (RSPN) Summary of Poverty Scorecard  Survey Report (2016) in the eight districts of the Sindh province.

While the bulk of the educational reforms have focused on improving the educational infrastructure such as classrooms, laboratories, toilets and water facilities which are direly needed; the nexus of micro-economics of education, how much of the investment on education will actually translate in financial and social returns in a given context, and poverty has hardly been addressed.

Devi, 41, mother of seven children, from the village of Sandiki, in Tando Allahyar does not send her 10-year-old son, a daily wage worker at a nearby agriculture farm, to school because he is paid Rs. 200 per day. This sum is significant for Devi’s family as it pays for their food and shelter. And this is sufficient reason for not sending this boy to the school.

Reasons for not sending girls to school for the fear of ruining the family’s reputation include concerns such as having a ‘love affair’ with someone on her way to or at school or engaging in behaviour considered incongruous within the cultural context. So not sending a girl to school is considered a way to mitigate the risk and then to marry her early is the socially acceptable pathway.

In different hamlets of District Tando Allahyar, just a few girls have passed matriculation, and the majority of girls were out of schools. Focus group discussions with women revealed that among the reasons that constrain them are: poverty, early marriage, cultural norms and harassment on the way to school. One woman mentioned that a girl has to take “the liability of household chores… so teaching her household chores and other farm works are more important than spending time and money on her education.”

We met a female health worker who was the only one from her village to have cleared the matriculation exams. She mentioned that the villagers were against girls’ education and she suffered from discriminatory cultural norms, even during primary school. She was prohibited to attend school due to the resistance of relatives, and when she passed the eighth grade she was married. She added that after her marriage her husband too was not supportive of her choice to learn but with the support of her father she continued. When she was offered a job as a health worker, she struggled to seek permission but eventually managed to continue her work. After four years, she cleared her exams and is working. She felt that her struggle for her right to education has led her to live a better life “when compared to other girls in the rural areas of my district Tando Allahyar.”

These interactions from the field work reveal that a variety of factors keeps millions of Pakistani children, especially women, out of school. Investments in education infrastructure,  must be done alongside creation of an enabling environment which includes functioning schools, dedicated teachers, safe passage to school, availability of social guidance, and provision of basic necessities so that parents don’t have to choose between food and education. These are some key factors  that need to be addressed in the education sector reforms.

This post gives the views of the author, and not the position of the South Asia @ LSE blog, nor of the London School of Economics. Please read our comments policy before posting.

Sultana Ali is a sociologist and field researcher at Rural Support Programmes Network. She can be reached at [email protected]

Dr Abdur Rehman Cheema is Team Leader Research at Rural Support Programmes Network. He can be reached at arehmancheem[email protected]com