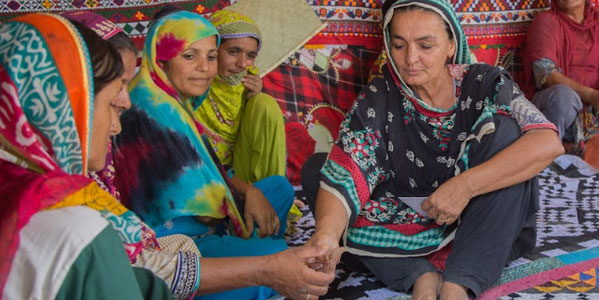 Adding men to the conversation of gender equality

Women empowerment is not about replacing one form of power with another. It is ideally defined as leading ‘to the liberation of men from false value systems and ideologies of oppression. It should lead to a situation where each one can become a whole being regardless of gender, and use their fullest potential to construct a more humane society for all’ (Akhtar 1992 quoted in Batliwala 1994: 131). Therefore, it is imperative to involve men in the conversation on women empowerment, in order to transform social norms and gender stereotypes that perpetuate discrimination and inequality.

During my visit to rural districts of Sindh – Dadu, Tando Allahyar and Tando Muhammad Khan, I found that there are still many regions in Pakistan where women lead a dire existence. Poor health, low literacy, economic insecurity and basic human rights are some of the issues women in these regions face. The purpose of my visit was to interact with women and collect their stories as part of the EU funded Sindh Union Council and Community Economic Strengthening Support (SUCCESS) programme. I interviewed various women from diverse backgrounds and cultural identities. I had the opportunity to interact with confident and independent women that have carried out tremendous accomplishments for themselves and other women in the community. Yet a large number of women are still struggling to achieve their basic rights or freedoms. As a result they become heavily dependent on the men in their lives, primarily their father, brother or husband.

In Tando Allahyar, I met a beneficiary of the programme, named Rani who was a member of her village’s tanzeem (Community Institution). She was a bit hesitant while answering questions, looking around her to make sure nobody was looking at us. The reason she explained was that the villagers were opposing her and were not happy with her going out from the village for work. Rani was the only woman in her village to go out of her community to give trainings and interact with people from other villages. The local men in her village traditionally did not allow women to show their faces to other people outside the village. They even do not allow women to meet other women of another village. Rani’s own in-laws were initially against her leaving and participating in the tanzeem’s activities. It was only through convincing her husband by making him attend sessions with her, did she receive the backing she needed from her family. Hopefully, the rest of the village would soon follow. There seems to be a dire need to educate the men to address the basic barriers towards women empowerment.

When women were asked why they felt like men placed so many restrictions on them, most considered that men saw them as uneducated and incapable of fulfilling their own needs or the community’s. Malooka from District Dadu explained, “Initially, when we started working in the village, men underestimated us and laughed at our efforts. They honestly did not think we would achieve anything”. After a few months Malooka and the other women in the village proved themselves by making their tanzeem. One of their biggest accomplishment was constructing a road through the Community Physical Infrastructure (CPI) scheme. She exclaims ecstatically “As women this was probably our proudest moment. We did something that the men in our village couldn’t do for years”. Seeing Malooka and the other members of the tanzeem, the men of the village realised that by restricting women, it constricts development to their own region. She has not received any opposition from the local men since then, clearly, men and women need to work together to improve their living conditions.

The SUCCESS programme boasts to have unique and distinguishing features as it exclusively focuses on mobilising and building institutions of rural women. Through this programme women were able to access technical training, financial support and also start small scale business. All of these components enhances women leadership, as women become leaders of their tanzeems, interact with local government in Joint Development Committees (JDC), and provide trainings as Community Resource Persons (CRPs). These women have had to struggle against traditional norms limiting them to their houses, but most have managed to get men to support them. Previously, these women were limited to their homes but now they play a pivotal role in supporting their families financially. The government and other institutions also work for women empowerment in the country but they need to implement it at the grass root level.  By uplifting only a few, we cannot bring desired change in the society. Development programmes should focus on the society as a whole to have a meaningful empowerment for all women. This can be achieved through involving men in the conversation on gender equality and female empowerment.

Cultural restrictions are a hindrance to access equal opportunity for women and create tough challenges for development in Sindh. How can a country develop when half of its population is deprived of the opportunities and bound to false cultural norms of the society? Women are perpetually being told that it is not in their culture to educate girls and it is inappropriate for a woman to go out for work? Men need to realise that these self-made and self-imposed ideologies of our society are continually blocking our own development.

This of course is not limited to rural regions of Sindh, there is a wider discussion globally of engaging men for gender equality as can be seen recently through the “HeForShe” initiative by the United Nations. In order to transform unequal power relations between men and women traditional perspectives of femininity and masculinity in society needs to be changed. Men need to begin to question power dynamics in their own actions at the personal and societal level. There needs to be an understanding that if men and women both play their role in developing society it will benefit everyone.