SUCCESS Programme is based on the Rural Support Programmes’ (RSPs) social mobilisation approach to Community Driven Development (CDD). Social Mobilisation centers around the belief that poor people have an innate potential to help themselves; that they can better manage their limited resources if they organise and are provided technical and financial support. The RSPs under the SUCCESS Programme provide social guidance, technical and financial assistance to the rural poor in Sindh.

SUCCESS Programme aims to enable the Government of Sindh from 2018 to support and sustain local Community Driven Development (CDD) initiatives throughout the province, through the provincial budget, based on a dedicated and costed policy in partnership with community institutions fostered by RSPs.

The specific objective is to stimulate local CDD initiatives to reduce poverty in eight poor rural districts of Sindh, paying particular attention to empowering women. The SUCCESS Programme will lead to increased levels and diversified sources of income for the targeted communities and households. 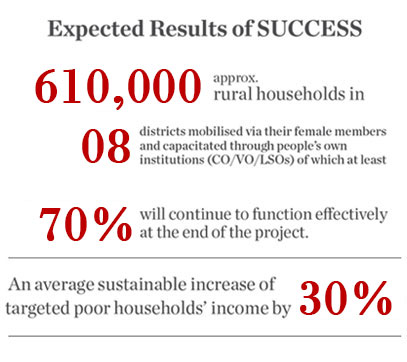 The European Union is a unique economic and political union between 28 European countries that together cover much of the continent. The EU was created in the aftermath of the Second World War. The first steps were to foster economic cooperation: the idea being that countries that trade with one another become economically interdependent and so more likely to avoid conflict. The result was the European Economic Community (EEC), created in 1958, and initially increasing economic cooperation between six countries: Belgium, Germany, France, Italy, Luxembourg and the Netherlands. Since then, a huge single market has been created and continues to develop towards its full potential. What began as a purely economic union has evolved into an organization spanning policy areas, from climate, environment and health to external relations and security, justice and migration. A name change from the European Economic Community (EEC) to the European Union (EU) in 1993 reflected this.

The EU is based on the rule of law: everything it does is founded on treaties, voluntarily and democratically agreed by its member countries. The EU is also governed by the principle of representative democracy and has delivered more than half a century of peace, stability and prosperity, helped raise living standards and launched a single European currency: the euro. One of the EU’s main goals is to promote human rights both internally and around the world. Human dignity, freedom, democracy, equality, the rule of law and respect for human rights: these are the core values of the EU. In 2012, the EU was awarded the Nobel Peace Prize for advancing the causes of peace, reconciliation, democracy and human rights in Europe.

NRSP – Established in 1991, NRSP is the largest Rural Support Programme in the country in terms of outreach, staff and development activities. It is a not for profit organization registered under Section 42 of Companies Ordinance 1984

RSPN, The Network of the RSPs, is the largest development network of Pakistan, with an outreach to over 40 million rural Pakistanis. It consists of 11 member Rural Support Programmes (RSPs), which have been operating since 1982. The RSPs espouse a common approach to rural development: social mobilisation. Social mobilisation harnesses people’s potential by fostering and strengthening participatory, transparent and accountable organisations of the people for poverty alleviation and to improve their quality of life.

Ernst and Young (EY) is a multinational professional services firm operating in Pakistan. In the SUCCESS Programme, EY is implementing the Technical Assistance (TA) component to aid the GoS in development of a Poverty Reduction Strategy (PRS) and CDLD policy for the province of Sindh.